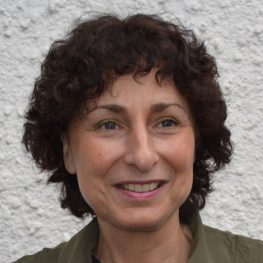 As senior lecturer in the International Media Studies Master's Programme, Petra Kohnen teaches, among other things in the fields of Journalism, Project Management, Marketing and Media Practice. She is also responisble for the International Language Programmes in Deutsche Welle Akademie.

Since 2010 Petra Kohnen has been responsible for the International Language Programs in Deutsche Welle Akademie and is senior lecturer in the Master’s program in International Media Studies.

Prior to this the journalist and media scientist held various positions at Deutsche Welle, including periods as radio host and presenter. She worked as Chief Reporter for Deutsche Welle’s Political Desk and was chief correspondent Radio&TV for foreign and defence policy in the Parliamentary Studio in Bonn and Berlin. During her time in the European department she developed and managed several multilingual EU-projects for DW. As CEO of a pan-European radio network she was responsible especially for Editorial affairs and for the Grouping’s management and strategic development. In the early years of private broadcasting studios Petra Kohnen had built up private radio stations and were as editor in chief in charge of their programs. At the same time she was a lecturer in media communications at the University of Trier.

As senior lecturer in the International Media Studies Master’s program she teaches, among other things in the fields of Journalism, Project Management, Marketing and Media Practice.

Digital transformation becomes one of her focuses  not just in terms of content but also in terms of approach. There are wearables that are already on the market like Apple Watch. Multimedia devices are already established media innovations. Now the sector is being confronted with mobile commerce, mobile advertising, mobile devices and mobile reporting. Digitization is changing our world in ways that can’t be stopped or reversed, which is why the master’s program analyzes digital disruption and the positives and negatives it brings with it.