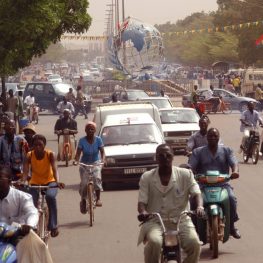 We would like to cordially invite you to the fifth webinar in the context of the AGEP. Matthias Nuessgen, Executive Director at the European Institute for Sustainable Transport (EURIST), will give a presentation on:

Today more than half of the world’s population lives in cities and this figure is expected to grow further. Rapid urbanization is thus one of the most pressing global issues. The number of megacities is constantly rising. Environmental issues play a central role in urban planning. However, in emerging megacities, infrastructure growth often takes precedence over the environment.
The urbanization and spatial growth of megacities now taking place in developing countries is very different from that which took place in developed countries last century. Traffic congestion particularly at peak times, though, is a major issue in centres of economic activity in the North as well as in the South.

This AGEP-Webinar lays out the risks as well as the chances of strategic transport planning in developing countries and gives good and bad examples. We will look at examples of good and bad practice as well as success factors.

We are looking forward to meeting you online soon and to engage in some vivid discussion!