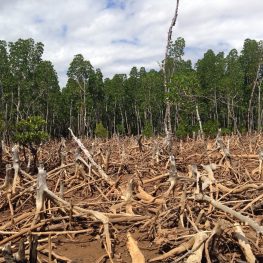 AGEP-WEBINAR Deforestation and REDD+ - Examples of the Amazon Region from Brazil When: Wednesday, 17 January 2018, 2 p.m. (CET)  Where: https://webconf.vc.dfn.de/redd-tud/ The Webinar is held by Philip M. Fearnside, a Research Professor at the National Institute for Research in Amazonia (INPA) in Manaus, Amazonas, Brazil since 1978. PhD in Biological

Deforestation and REDD+ – Examples of the Amazon Region from Brazil

The Webinar is held by Philip M. Fearnside, a Research Professor at the National Institute for Research in Amazonia (INPA) in Manaus, Amazonas, Brazil since 1978. PhD in Biological Sciences (University of Michigan, Ann Arbor, Michigan, U.S.A.) he has authored over 600 publications (http://philip.inpa.gov.br). Honors include Brazil’s National Ecology Prize, the UN Global 500 award, the Conrad Wessel, Chico Mendes, Benchimol and Scopus prizes and membership in the Brazilian Academy of Sciences. In 2006 Thompson-ISI <http://esi-topics.com/gwarm2006/interviews/PhilipFearnside.html> identified him as the world’s second most-cited scientist on the subject of global warming, and in 2011 he was identified as 7th in the area of sustainable development <http://dx.doi.org/10.1007/s11192-011-0533-4>

Brazil’s Amazonian deforestation releases substantial amounts of carbon, and avoiding this emission has monetary value in mitigating climate change. Reducing Emissions from Deforestation and Degradation (REDD+) is the current term for a set of measures to provide financial incentives to avoid these emissions. In contrast to mitigation by reducing fossil-fuel combustion, which is also essential to contain global warming, avoiding Amazonian deforestation provides non-carbon benefits in protecting other environmental services such as maintaining the water cycle and biodiversity and in protecting the region’s indigenous and other traditional human populations. The large carbon stocks in the forest that is still standing in Amazonia give efforts to find ways to control deforestation here an importance for climate far greater than in other places. This is both because of the scale of potential future deforestation emissions and because of the role of deforestation in crossing tipping points leading to uncontrolled forest degradation and emissions, including contributing to a potential “runaway greenhouse.” Controlling Amazonian deforestation requires substantial amounts of money, and the potential monetary value of avoiding emissions offers a critical contribution to providing these funds. Opposition to paying for carbon benefits, based on philosophical arguments questioning putting a “price” on nature, does not offer realistic alternative solutions.

Tapping the value of environmental services potentially offers a sustainable alternative to the current destructive economy in rural Amazonia, and avoiding emissions is the most likely environmental service to yield significant monetary flows on the time scale needed. Deforestation in the region involves a wide range of actors and processes, and avoiding it is a complex problem with high uncertainty and many opportunities for biased or fraudulent accounting. Deforestation decreased substantially from 2004 to 2008 for a variety of reasons largely unrelated to governance improvements, but these had demonstrable effect on a continued decline through 2012, after which deforestation rates have trended upwards. Critical issues in accounting for carbon benefits include baselines, permanence, time preference, leakage and uncertainty. The history of negotiations and debates on these issues has been marked by distortions stemming from geopolitical factors that have nothing to do with climate change. Addressing the issues in this “theoretical battlefield” surrounding REDD+ is essential to efforts to maintain Amazonian rainforest and to contain global warming.

We are looking forward to seeing you online soon!